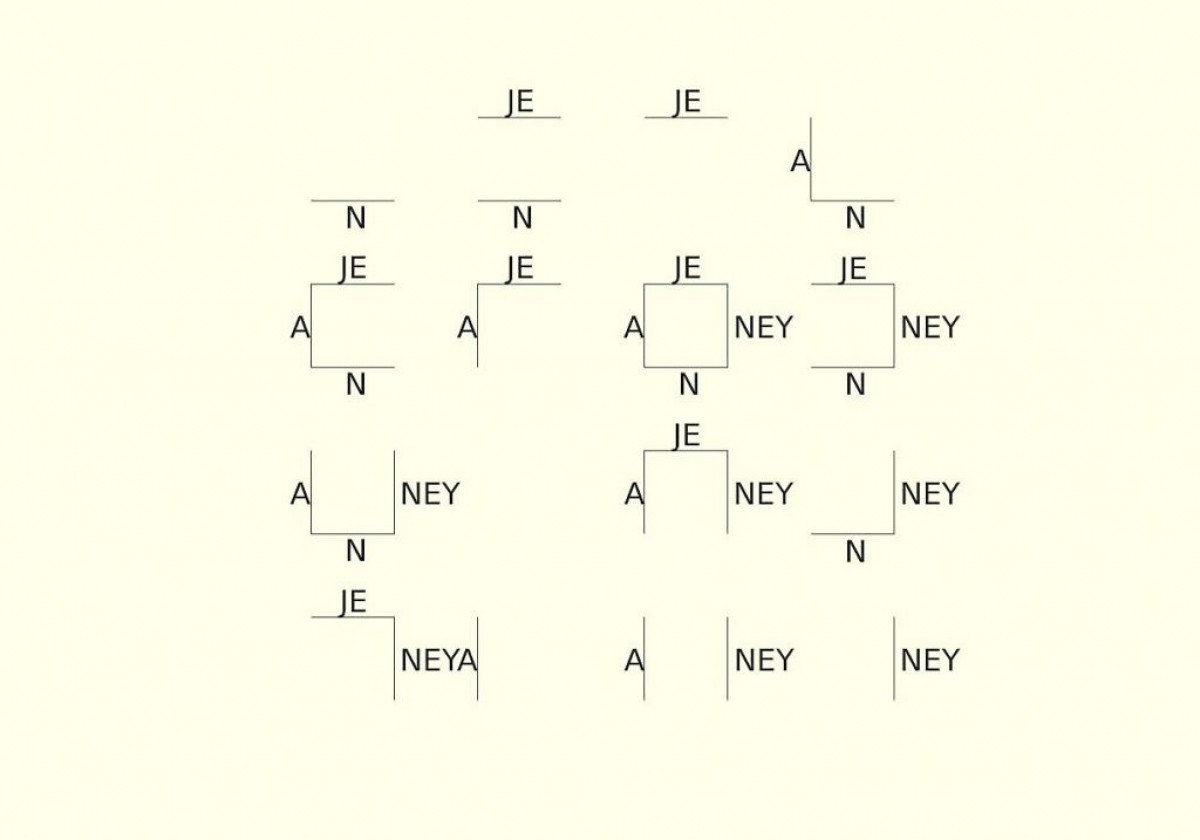 "The approach of the composers is defined by the different definitions of notation and sonority; at the same time, they share a mutual focus on the tonal characteristics of the language material."

Sussane is a piece for solo soprano from a series called Names among other pieces like, Richard for solo guitar, Jens for piano trio, Konstanz for organ and projections, Margaret for tape and Mario for a small ensemble. The pieces is about a rather crazy woman getting ready for a party. She seems to be thinking different elements in her environment know that sheʼs not ready and call on to her. She says in the end that she will in fact never be ready.

Nikolaus Gerszewski: More Songs on Nothing (for voice & piano) 2018

The piece belongs to the genre of mobiles; these are pieces consisting of kinetic modules, which have to be put together by the performer, according to specific playing rules. Here there are always 10, not coordinated notations, for piano and voice, which can be combined ad libitum. Each of 10 pieces is noted in two lines, the 2nd of which is the rake-form of the 1st. The reference tone is chosen individually; from there the intervals within the individual parts are fixed. The textmaterial is chosen freely, preferably from a language not spoken by the performer; whereby individual words or syllables can be left out for the sake of singability, regardless of language context. The piece explores the relationship of constants and variables within music; one may just as well say: the relationship of composition and interpretation; whereby the term interpretation indicates both, the musical performance, and the individual listening experience.

Christoph Herndler: I SING YOUR NAME – ZOLTÁN JENEY (for voice) 2020

Christoph Herndler has developed his own medium, which he calls ‘Notationsgrafik’. In contrast to a graphic score, the Notationsgrafik is always applied in combination to an interpretational instruction. The graphic design reveals the pure form; the shaping of the piece in actual sounds falls basically into the area of responsibility of the interpretation. One and the same graphic design can be combined with different interpretation-instructions, and each instruction can lead to different sounding results.

The Notationsgrafik ‘I sing your Name’ can basically be applied to any name (any text-object), whereby the sound material is generated from the combination possiblities of the letter sounds of the chosen name. For Átlátszó Hang Festival, we have asked Christoph Herndler to create a version with the name Zoltan Jeney; as a hommage to the great Hungarian composer who passed away recently.

The song cycle sets poems by E.E. Cummings, William Blake, Sándor Weöres, Dezső Tandori and Friedrich Hölderlin to music; each poem is sung in its original language. In each individual piece, Jeney has applied a different compositional technique; whereby the text always constitutes the central formative element for the music. In the musical moment, the figurations of sound and language merge to a unity.

Christoph Herndler has studied organ and electroacoustics at the university of music in Vienna, and composition with Roman Haubenstock Ramati. He has studied abroad at Stanford University, California, Department of Visual Art in San Diego and Art Department in Claremont, Los Angeles. 1997 he founded Ensemble EIS, an interdisciplinary project-group, involving numerous reputable musicians. His work priorities are notational graphics and intermedial scores, which can be realized also in extra-musical media, notational objects, musical installations, video works, and art in public spaces.

Zoltán Jeney (1943–2019) has studied composition with Ference Farkas, at Liszt Ferenc Musicacademy Budapest and Accademia Nazionale di Santa Cecilia in Rome, in the 1960s. Hie first compositions were influenced by Bartok and the 2nd viennese school. In the late 1960s he started to get interested in the theories of Pierre Boulez and Karlheinz Stockhausen, as well as oriental Philosophy. In the 1970s he composed in minimalistic style; his works are often described as extremely sparse and static. Since 1986 he was professor at Liszt Ferenc academy of music Budapest, where he was director of the composition department until 1995.

Nikolaus Gerszewski is academically trained as a visual artist, and autodidact as a composer of experimental music. Since the 1980s he is involved in non-representational art in theory and practice. In 2005 he firstly came in touch with Cornelius Cardew’s graphic score Treatise; ever since he develops his own musical notations, in form of graphics, texts, alternative sign systems and semi-conventional sheet music. Since 2006 he directed Forum Neue Musik at Christianskirche Hamburg, and was one of the originators of Blurred Edges festival of current music. Since 2013 he teaches experimental sound-production at university of fine arts (MKE) Budapest, and at scientific university Pecs (PTI). In 2017 he founded ensemble mobile, with György Bartók.